If you thought we would be leaving Luke chapter one just yet, think again! We are just getting to the part where we see and hear a first-hand account of the beautiful relationship between Mary and her relative, Elizabeth, an older cousin who is “advanced in years.”

After Mary’s encounter with Gabriel, she decided to make the trek seventy or eighty miles south to her cousin’s house in Judea. Most historians believe the journey took her three or four days. Walking long distances would have been fairly common for Mary, though the fact that she embarked on such a long journey “with haste” gives us some insight into Mary’s state of mind.

What could Mary be running from? Or what was she running to?

You see, Mary was in a little bit of a cultural pickle. Although I believe Mary fully trusted God, she was fourteen, she was unmarried, and she had just found out that she was going to give birth to the Savior of the world!

In modern day talk we would say that Gabriel just “dropped the mic” on her!

But the angel Gabriel made a specific and detailed point to relay the information about Mary’s cousin, Elizabeth, who was also pregnant. This news would have been a great encouragement to Mary who no doubt knew what an unexpected pregnancy this was as well.

Are you catching the significance of the timing? Coincidence? I think not!

The fact that Mary set out to see Elizabeth “with haste” would make perfect sense. If she had stayed in Nazareth, Mary would have been signing up for self-imposed isolation at best, or worst, social ostracism, which was a very real threat in her hometown.

When we find ourselves in hard seasons of our own as women, author Sophie Hudson said it perfectly, and I couldn’t agree with her more:

Watch as Mary’s safe place with Elizabeth becomes a sacred place! After her long journey, Mary, was met with instant understanding and a loud cry of excitement from her cousin. What a relief this joyous reception must have been!

Matthew Henry gives us beautiful insight into this special moment: “It does not appear that Elizabeth had been told anything of her cousin Mary’s being designed for the mother of the Messiah; and therefore what knowledge she appears to have had of it must have come by a revelation, which would be a great encouragement to Mary.” (Commentary, Luke 1:39-56)

What I love about real, honest and genuine relationships between women is that we can find comfort and encouragement from someone in similar circumstances. Mary and Elizabeth both found themselves in situations they never could have imagined.

This is where women thrive best, in the molding and meshing of similar seasons and stories. We are simply better walking through life together.

Within the first few moments of their greeting, Elizabeth, encouraged, affirmed, tended, and blessed Mary. And it would draw something out of Mary that would be forever marked in history.

At this point in the story, we haven’t heard much from Mary. Except for an honest question to the angel Gabriel about how exactly things were going to “work” since she was not going to become a mother in the usual way, being a virgin and all. Except for this query and a profound statement in which she agreed to go along with the plan, Mary has been pretty quiet on the scene.

Yet, after Elizabeth affirms and encourages Mary, Mary belts out a song of praise that leaves me speechless:

“And Mary said, My soul magnifies the Lord, and my spirit rejoices in God my Savior, for he has looked on the humble estate of his servant. For behold, from now on all generations will call me blessed; for he who is mighty has done great things for me, and holy is his name” Luke 1:46-49 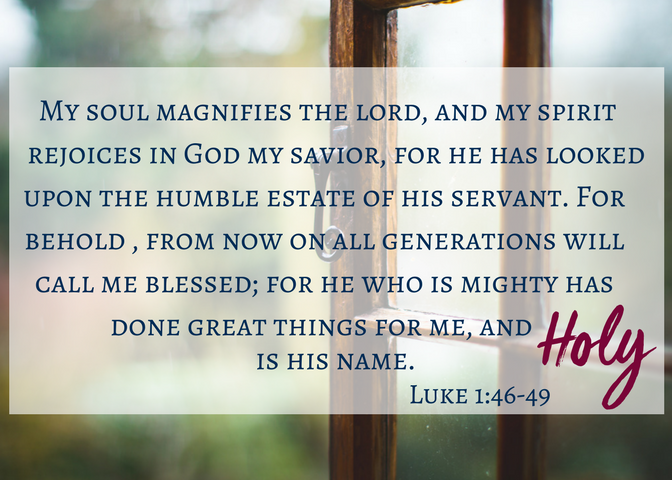 I don’t know about you, but I had to read her song of praise several dozen times to grasp how profound these words were. Mary’s faith was on fire, and in large part because of Elizabeth.

That is what we as the body of Christ can do for each other: to stir up each other’s faith to believe, to affirm our sister’s calling, to encourage a friend’s soul, to bear one other’s burdens!

What a beautiful way God designed the church. In 1 Corinthians 12:25-27 we see his blueprint as he states; “so that there should be no division in the body, but that its parts should have equal concern for each other. If one part suffers, every part suffers with it; if one part is honored, every part rejoices with it. Now you are the body of Christ, and each one of you is a part of it.”

Sisters in Christ, we have the power to be the Elizabeth’s to the Mary’s of this world. We can be the friend who sees with spiritual eyes that God is at work deep inside another, and we can speak hope into the mysteries, confidence into the uncertainties.

Just when a sister is in distress, it may be our words, empowered by God, that infuse her whole being with faith and endurance.

Let us rise up to encourage and affirm each other because we never know the true weight of the calling that a sister may be carrying. When we offer the life-giving words of Elizabeth to another, we may be offering her the strength she needs to bring forth what God has called her to birth, and how this companionship will bless and affirm our soul as well!

« Even so, it is well with my soul
The power in our praise »