No matter where we are in our walk with God, many of us struggle with our identities. Although we have called on Jesus as our Lord and Savior, we still struggle with who we are in Christ. We know we have become a part of God’s family, saved by grace, given mercy, and forgiven of our sins. Yet, for many of us, we still don’t know what that means in light of the person we see in the mirror.

There are two truths I believe God wants you to take hold of today.

You are a princess in the Kingdom of God.

You may have heard this popular inspirational quote, “I am the daughter of a King who is not moved by the world for my God is with me and goes before me. I do not fear because I am His.” We love the truths expressed here, especially when we are trying to lift each other up during times of trial. However, this is not just a “feel-good” meme for us to post on social media and the walls of our homes, but a truth that God wants us to take hold of deep in our spirits.

While there are many Scriptures that represent the truth of this quote, I’d like for you to consider one of my favorites, Psalm 45. While it describes the royal court, the writer directly speaks of God on his eternal throne (Psalm 45:6). Additionally, scholars attribute the Psalm as describing Christ’s relationship to the Church which is described as the Bride of Christ. Verses 10 and 11 in the New Living Translation state:

“Listen to me, O royal daughter; take to heart what I say.
Forget your people and your family far away.

For your royal husband delights in your beauty;
honor him, for he is your lord.” 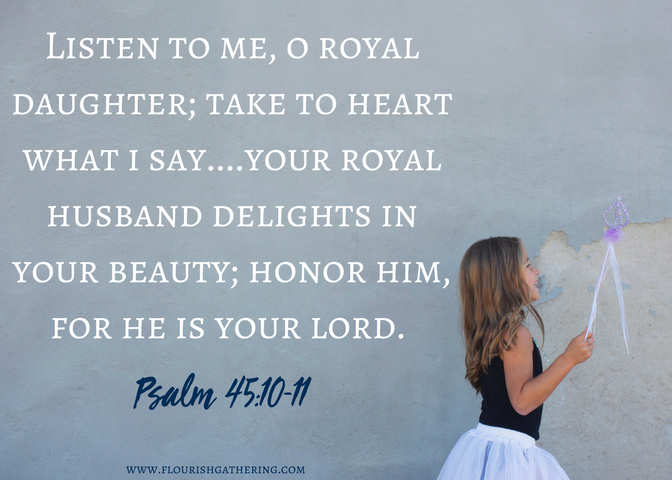 Did you catch that? We are “royal daughters” in the Kingdom of God. He delights in our beauty! Dear friend, did you know that it’s not just the beauty that can be seen with the eyes that makes our Heavenly Father rejoice over us? It is our inner beauty that brings Him such joy! In 1 Samuel 16:7, God says that He “doesn’t see things the way you see them. People judge by outward appearance, but the Lord looks at the heart.”

You are the embodiment of the Proverbs 31 woman.

For many of us, including myself, we read about the Proverbs 31 woman and immediately disassociate ourselves from her. She is described as a “wife of noble character” (v. 10) whose “children stand and bless her” (v.28), and most of the time we hardly feel we fit that description. Consider with me, however, that no matter what season of life you are in, you are a combination of the two truths I have set before you:

You are a Proverbs 31 Princess

You may be asking how in the world I have come to this conclusion. In our culture of film and various media, we are bombarded with images of those with whom we would gladly exchange places. We oftentimes identify with one of the characters we’ve seen portrayed in Disney films, famous for their female heroines portrayed in stories of adventure and romance. Perhaps you are like one of these fictional princesses:

I do not have to name them for you to identify with them. All of them have experienced some kind of ordeal. And, all of them had to reach down inside themselves to find their inner strength.

Let’s view the five young women I have mentioned in light of Proverbs 31.

The difference between these fictional princesses and you and me is that we truly are daughters of the most High King. Each one of us possess what we need to be the woman described in Proverbs 31. You don’t have to be married and have children to fit her description. We all endure hardship and possess strength, dignity and integrity, serve others with kindness, energy, strength and hard work. We each have been given the Spirit of God, which enables us to live out these qualities in everyday life. Romans 11:9 tells us “The Spirit of God, who raised Jesus from the dead, lives in you.”

So, rejoice, dear sister! You are not just an ordinary woman going through the throes of life, destined to stay where you are. You are the jewel in your Father’s crown! You are a Princess who is every bit the Proverbs 31 Woman.

As the Scripture says, “There are many virtuous and capable women in the world, but YOU surpass them all!” Proverbs 31:29

Michelle Flaugh is a fourth-generation Russian Jew who became a believer in Messiah at the age of 25. While she grew up in Plano, Texas and has lived in numerous places, she calls Florence, Kentucky home. She is wife to Rob, momma to Kyra, and (step)mom to Cody and Amber. In addition to being a wife and mother, she homeschools Kyra and serves with several ministries. Her deepest passion is to share the heart of God with others so they can embrace their identity in Christ and learn to walk in the calling and purpose God has on their lives. She currently blogs, as the Lord leads, at Armsofgracejourney.blogspot.com. 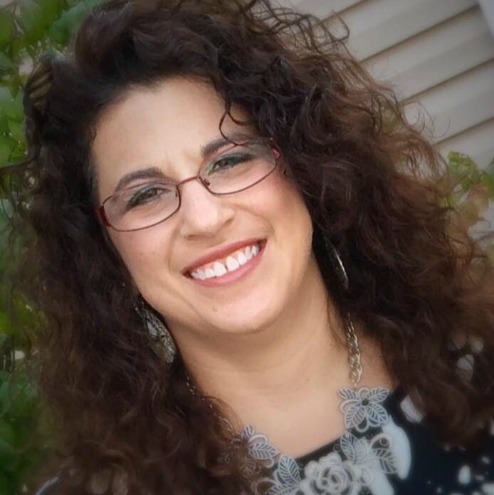