“Joy in affliction is rooted in the hope of resurrection, but our experience of suffering also deepens the root of that hope.” -John Piper

Sometimes I wonder what it’s like to live through winter. I mean a real winter, not the “oh-my-gosh-it’s-gonna-be-in-the-forties-today!” I’ve experienced Florida winters my whole life.

Reflecting on the stark bareness of an icy landscape, frigid and still, I am fascinated by hidden life quietly anticipating, veiled beneath the snow. This transformation from snowflakes to spring is what God has been doing throughout the ages — creating beauty out of brokenness, resurrecting life from death.

This is my winter story.

Join me at home in December, 2013. I was the mom of two little ones, a girl and a boy, impatient to be pregnant with number three. That day began with what I believed was an early period, but progressed unusually throughout the day with painful cramping and, much to my alarm, the passing of a large clot.

Despite reassurances from medical friends, I was positive this was anything but normal.  Prompted by the Holy Spirit, I took a pregnancy test, shocked to see two lines appear on the test strip.

In my ignorance, my baby’s life could have passed unnoticed, but God, in His great mercy, revealed this knowledge to me. Every child deserves to be known.

Although her ephemeral presence was unknown to me, He saw. He knew and rejoiced over her tiny form with singing. In the depths of the earth, He wrought my child, called her by name, and said, “Live!” But now, she was gone.

Never had I experienced such acute emptiness. With each drop of blood, I felt life pouring out of my womb — a place meant to nourish life had become a grave.

A week later I found myself staring blankly at an ultrasound screen, the dark image of my womb vacant of life. Inside the hollowness ached.

“Everything looks good!” the doctor ironically reported after perusing the image.

“You can always try again,” came the well-meaning technician in attempt to comfort me.

What they failed to realize was I was not mourning the absence of a pregnant belly, but the loss of a specific person.  Souls are unique; babies are not interchangeable.  But how would this life be memorialized?

Desperate to have something tangible to remember my baby by, I commissioned my sweet friend, Sereen, to paint a piece as God led her. The only inspiration I offered was of the recurring image God had been pressing into my heart: the same heavenly arms that were cradling my baby were also holding me.

Soon after, I would discover just how far reaching was His embrace.

Several weeks later, I found myself at an unfamiliar church, sandwiched between my family members, trying to blend inconspicuously in the far back right of a crowded auditorium. As the pastor called those with a “prophetic word” to share with the congregation, I inwardly rolled my eyes in bitter cynicism.

A woman stepped up to the mic and began,” I felt like the Lord wanted me to say… to anyone who has lost a child… just know that God is carrying you.”

Two unbidden tears slid down my burning cheek as I clutched my toddler, trying to quell my sobs from bursting forth. This was the moment when the “love of God” transformed from abstract theory to undeniable, personal reality.

The same God who created the vast heavens was ever present in a mother’s grief; the Divine Heart broke with mine and wept over my unborn baby’s death.

“Precious [and of great consequence] in the sight of the Lord Is the death of His godly ones [so He watches over them].” Psalm 116:15 AMP

With great tenderness, the Lord loosened sorrow’s inexorable grip, allowing me to entrust both my child and my heart into His sovereign hands.  With grief and hope profoundly intermingled, I waited on He who would bring me to life again.

Danielle Kolb, wife, homeschooling mom of four, and music teacher. She and her husband Joe reside in Gainesville, FL since meeting at the University of Florida in 2005. An enthusiastic member of Flourish, Danielle is passionate about discovering God’s word with other women and encouraging others to cultivate an authentic relationship with the Lord. A lover of all things chocolate, Danielle also enjoys a good Jane Austen novel, chubby babies, and the necessity of morning coffee. 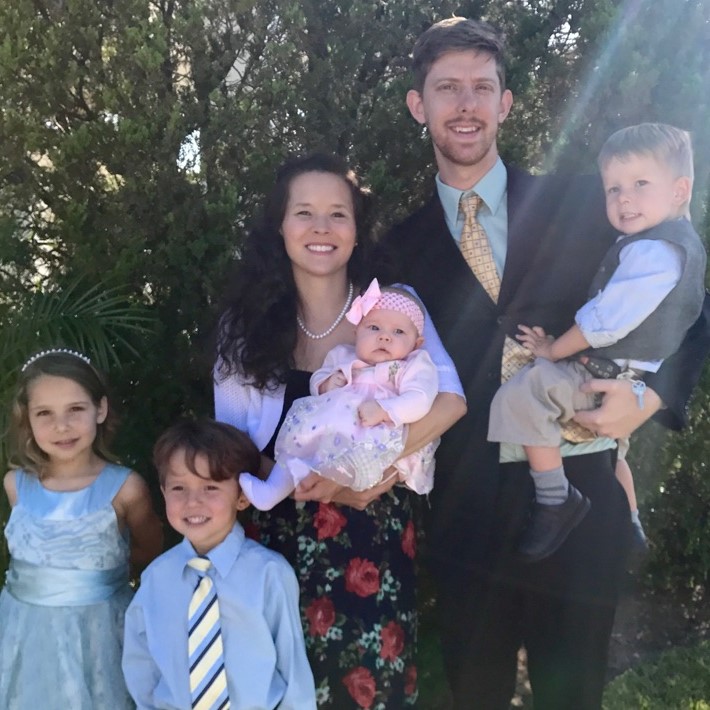